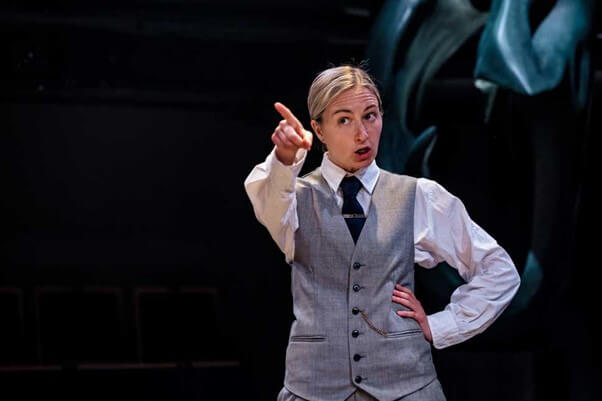 “Smart, cynical comedy”
“It’s Lizzy Watts’ magnetic performance as Chevalier, though, which elevates the production, subtly capturing the contradictions of the wily, well-intentioned heroine getting caught up in the transgressive thrill of outwitting, seducing, or buying off anyone who gets in her way. Already accustomed to the autonomy granted by inherited wealth, Chevalier exalts in exploring the new freedoms she’s afforded when she presents as a man. Watts’ richly layered performance works in both an unsettling edge of sadistic cruelty, and a fascinating, erotically charged intensity as she discovers her falsified feelings for the Countess are more genuine– and more powerful – than she expected.”
THE STAGE REVIEW

“Lizzy Watts’ animated and swaggering portrayal of The Chevalier is deeply layered.  Mocking looks, quick witted one liners delivered with perfect timing, or longer derisory monologues, poke fun at the misogyny of Lelio, and indeed most of the male characters.  It feels like a fast paced duel, with Watt’s The Chevalier always having the upper hand”

Review: The False Servant at The Orange Tree Theatre